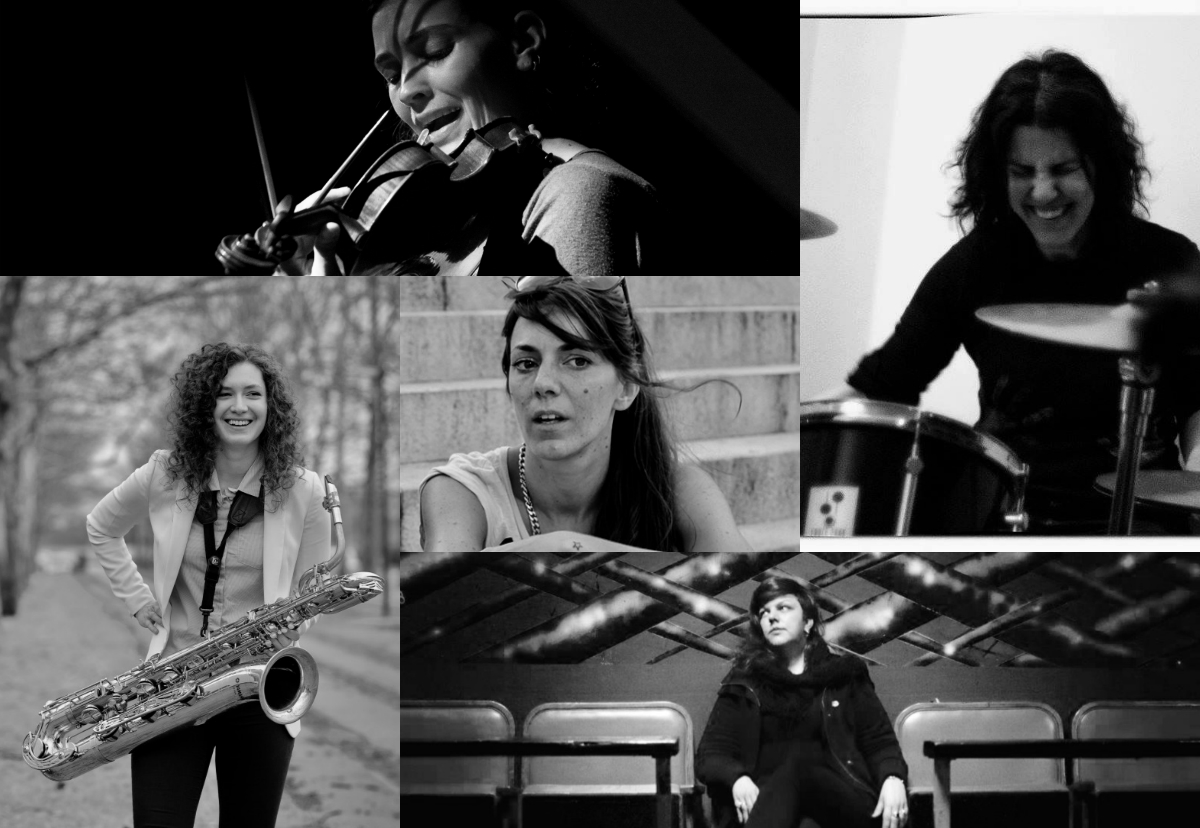 This is not a band concert. These are not individual concerts. These are encounters of women artists who work in different places of the sound arts. Maybe they have a lot in common, we don’t know that, and we won’t ask them either, as we may find the answer in their sound expressions. But what they do have in common is that they are all here now. Their specificities arise from their specific referentialities, which, through an encounter, and especially with traversing from one to other, interweave into a broader mixture of historical and future starting points, dictions, platforms and, again, referentialities. This is a proposition of their (and our) togetherness at a time of an inconceivable togetherness.

Ana Kravanja (1983) is a member of the music group Širom. She also creates original music for theatrical performances, films, animations, narratives and poetry. In 2013, she conceived the Glacies project in which musicians play on refrigerator shelves. Between 2012 and 2016, she created music for fourteen calimbas and recorded two records with the duo Najoua with Samo Kutin. She is one tenth of Olfamoštvo. As an improviser on the violin, she collaborated with numerous Slovenian and foreign musicians and dancers: Samo Kutin, Tomaž Grom, Irena Tomažin, Vid & Jošt Drašler, Andrej Fon, Ina Puntar, Tea Vidmar, Tijana Stanković, Matija Schellander, Susanna Gartmayer, Margarethe Maierhofer-Lischka, Henrik Olsson, Raphael Roginski, Ryuzo Fukuhara, etc.

Jasna Kolar (1995) is a saxophonist, active in various ensembles of classical, jazz and improvised music. After graduating in music at First High School in Celje under the mentorship of prof. Aleš Logar she continued her education at the Conservatory of Music and Ballet Ljubljana under the mentorship of prof. Klemen Kotar. She regularly performs with Olfamoštvo, while as a member of Subconscious.Rituals she played at the Jazz Cerkno Festival in 2018 and at the Jazzinty workshop in 2018. She also performed at the Zvokotok and Neforma festivals, Friforma and Sound Explicit 2017 with a music ensemble Dré Hočevar Coding of Evidentiality.

Jelena Rusjan (1979) graduated from the Department of Acting of the Academy of Performing Arts in Sarajevo. In 2004 she moved to Ljubljana, where she – as an actress and dancer – participated in numerous performances, including European co-productions. In 2009 she created her first play Škrip Orkestra, in 2013 another one, Škrip Inc., which was co-produced by Maska Institute and Centre for urban culture Kino Šiška. In 2016, she completed her Škrip Trilogy with the performance ÜberŠkrip at the Mladinsko Theatre. In 2012 she founded the band Trus!, where she plays bass and sings. In 2014, as a bassist and vocalist, she joined Borghesia. She lives and works in Ljubljana.

Nina Farič alias Kikiriki has been for already twenty years active in different musical groups and collectives. First as a vocalist, later as an instrumentalist and since 2009 as a solo noise performer. She focuses on experimenting with live-produced sound from mostly analogue synthesisers and do-it-yourself circuits. Under the name Kikiriki, ten issues were published. Most of the sound is recorded live, at studios or concerts. In addition to experimental sounding she is also a DJ at the collective Dubomb under the name Madamdub.

Tina Jenko (1972) is a drummer. She plays drums occasionally, and occasionally she plays them regularly. The plants love her officially, and she gives them back their love. Being from the coastal region, she likes weird music if that music is not too weird and there is enough meat in it. According to the horoscope, she is most often an astrologer. She loves to live and work, albeit in Ljubljana.